According to the latest Democracy Index from the Economist Intelligence Unit, democracy did not go into decline in 2018 for the first time in three years. The index rates 167 countries by 60 indicators, including electoral processes and civil liberties. Just as populists with autocratic tendencies have won elections in recent years, so too has political participation shot up. But this year’s results may signal only a pause, not an end, to democracy’s retreat".

A welcome break: The retreat of global democracy stopped in 2018

Jan.8.– Democracy stopped declining in 2018, according to the latest edition of The Economist Intelligence Unit’s Democracy Index. The index rates 167 countries by 60 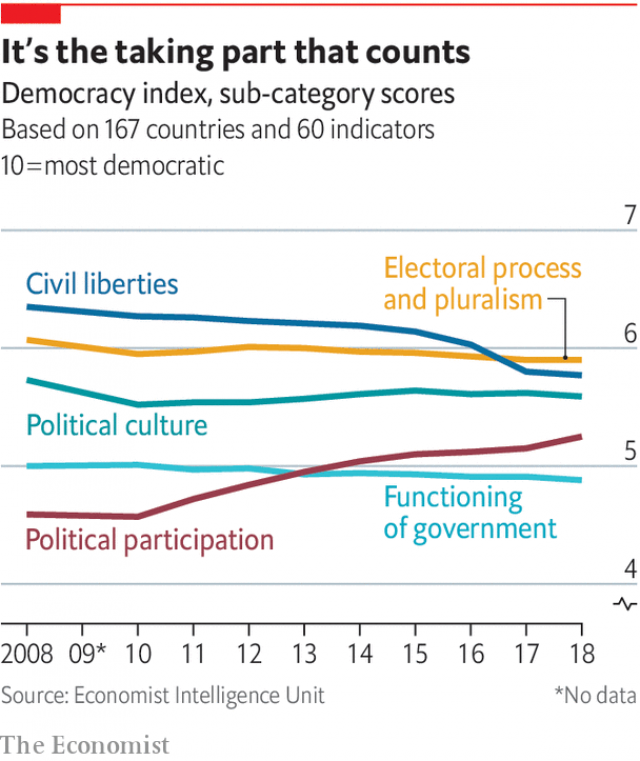 It is stricter than most similar indices: it concludes that just 4.5% of the world’s people live in a “full democracy”. However, the overall global score remained stable in 2018 for the first time in three years. Just 42 countries experienced a decline, compared with 89 in 2017. Encouragingly, 48 improved.

In recent years, threats to democracy around the world have become increasingly obvious. The Arab spring fizzled. China’s leader is poised to rule for life. Populists with autocratic tendencies have won elections in the Philippines, Brazil and Mexico and subverted democratic institutions in Hungary, Turkey and Poland. Perhaps because the trend is so glaring—strongmen in different countries often copy each other’s tactics, soundbites and scapegoats—voters are not taking it lying down.

Political participation improved more than any other measure on the EIU’s index. This is true even in advanced democracies such as the United States, where voters are highly disgruntled. Polarisation in America has led to anger, gridlock and the . According to Gallup polls from January to mid-November 2018, the share of Americans who approve of the way that Congress is handling its job had fallen to an average of 18%, down from 40% in 2000. Perhaps because they are so cross, they are more likely to vote. Turnout at the 2018 mid-term elections was the highest for over 100 years...

Please, help with your valued donation to offset the cost of maintaining this site and to assist us in our quest for democracy and human rights.
This site does not receive funds
from any government or institution.
Any amount in any major currency, from $1 up, makes a difference!
Just write down your generous donation to Democracy
in the space below: